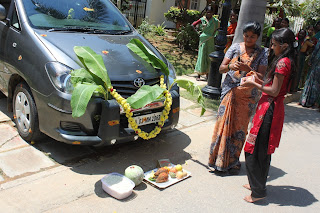 When I staggered into the gym early yesterday I thought it a little odd that all the weight machines were proudly wearing the three line talika (that's three horizontal lines in a sort of paste which can be turmeric/water) usually used as devotional symbols for followers of Shiva. I didn't question this - this is India after all and things happen!

I get back home to see Shankar giving the car an extra vigorous wash and Sweetie asking if she and Shankar can do a special puja for the car. No reason why not, and she and Shankar go to buy the necessary. Time for some serious googling!!

Now, I was aware that we are currently in the 10 days of Navrati. However it transpires that yesterday was Ayudha Puja - the day for the worship of the gods of implements. This day is always the 9th day of Navrati. One of the wonders of India is that festivals vary from state to state - not only which ones are celebrated, but also the underlying legends and the traditions. Maybe accepting the different ways their own Hindi festivals are celebrated throughout the country has lead to the acceptance of all other religions and their festivals in India or maybe Indians just like to party period! Anyways in Karnataka the tradition started when weapons were prayed over the day before some big battle. This is the day to seek blessings over all tools and implements. This includes musical instruments and school books. Aparently in years gone by students looked forward to this time when their books were laid out to the gods for three days and guess what - they couldn't study! However these days it is assumed that one book is sufficient to summon blessings from the gods so no break in study patterns. 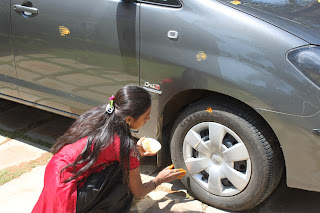 Sweetie and Shankar reappear with bags of loot! Firstly the pastes are made up and the car gets numerous talikas on its now gleaming body work, tires, hubcaps, windows.... 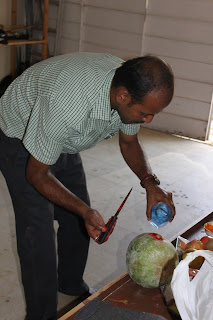 Next step is interesting. A square hole is cut in a white pumpkin and into the hole some of the red vermillion paste is poured, the hole plugged and the pumpkin shaken. I am now thinking that the sort of strange watermelon I saw smashed on the pavement/sidewalks earlier today were not watermelons after all! Apparently the pumpkin gets hurled to the ground as part of the puja and then the broken segments are left in front of the doors of the garage. The pumpkin is a substitute for animal sacrifices as it is fleshy and the red vermilion represents ...... yes you got it the blood!  Shankar is horrified at the business savvy of the local traders. Prices of the puja kit have apparently doubled for these few days. Driving around later we see streets lined with white pumpkins, banana leafs, garlands of flowers etc. for sale, and some of the best dressed vehicles ever!

The incense is lit and we are ready to roll. Under each car wheel is a lemon. When all is said and done the car will roll over these and smash them - which wards off evil.  There are a variety of fruits, sweets (hoping we get to eat these!), coconuts and puffed rice on the tray as offerings. 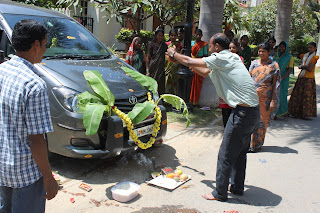 Shankar then conducts the puja. The white pumpkin and coconuts have some sort of burning wax put on them and are picked up and circled in the front of the car three times, then hurled and smashed to the ground while some words are chanted (didn't get to the bottom of what these were). We had by this time drawn a crowd of some of the neighborhood gardeners, as is custom, they are given the puffed rice and sweets and some money as a gesture of goodwill.
So the car is blessed for a year. Having spent the best part of a year negotiating the roads of Bangalore our car has aged beyond its years in terms of scratches and dents. Maybe the next twelve months will be kinder!!